Turmeric, a golden spice traditionally only seen in Indian curries, is becoming one of the most popular superfoods amongst older Australians. Turmeric is being revamped in the form of golden turmeric lattes and as a delicious aromatic tea allowing Australians an easy way to enjoy the health benefits.  Turmeric contains the powerful antioxidant curcumin which studies show has anti-inflammatory effects on the brain and body. Inflammation is one of the leading causes of many age related degenerative diseases showing why turmeric is becoming so popular amongst health-conscious Australians.

1. Reduces Inflammation: It is believed that chronic low-level inflammation plays a major role in Western diseases such as heart disease, cancer, Alzheimer’s, arthritis and other degenerative conditions. Turmeric’s main active ingredient, curcumin, is a strong anti-inflammatory. It is so powerful that in a study of patients with rheumatoid arthritis, curcumin was more effective than the anti-inflammatory drug.

2. Antioxidants: Turmeric delivers a two-fold benefit where curcumin is a powerful antioxidant in itself but it also stimulates the body’s own antioxidant enzymes. Antioxidants are important as they remove dangerous free radicals from the body which can damage other cells DNA (which can lead to diseases such as cancer).

2. Mood & Mind: Studies are showing turmeric has a positive impact on balancing mood and can help in the treatment of depression. In a controlled study of 60 patients, the group given curcumin showed similar improvements to the group given antidepressant drug Prozac. Research is also showing evidence that turmeric can boost serotonin and dopamine which are neurotransmitters that, when low in levels, are linked to depression.

4. Lowers the risk of heart disease: Heart disease is the biggest killer in the world. Turmeric antioxidant curcumin may help reverse many steps in the heart disease process. Curcumin enhances the functioning of the lining of blood vessels enabling it to better regulate blood pressure and blood clotting. As a result, this helps protect your cardiovascular system.

To maximise the health benefits, it is important that you use turmeric grown from the Alleppey region in India as this area grows turmeric with the highest level of antioxidant curcumin. It is also important to consume turmeric with a hint of black pepper which contains the enzyme piperine which increases the bodies ability to absorb curcumin by up to 2000%.

We have a very popular Turmeric Matcha Tea blend (suitable for making a turmeric latte or a tea) which uses high quality Alleppey turmeric and has been blended with green tea, cinnamon, nutmeg and the necessary hint of black pepper.

You can also check out these great recipes you can make with our Turmeric Matcha Tea: 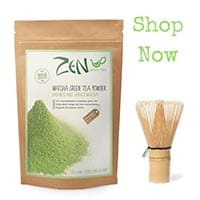